Cheryl moved to Israel on May 14, 1999, after being sent out from the Avila Beach Calvary Chapel in California. She initially volunteered with Christian Friends of Israel in Jerusalem as their Conference Coordinator, organizing the Shavuot Conference (Feast of Pentecost) for the year 2000.

Cheryl then worked for the clandestine Voice of Hope (VOH) radio station, which was situated on the Israel/Lebanon border, and helped organize the move of VOH to Jerusalem in 2000. (I was once able to visit the station, then run by Don Otis, son of VOH founder, George Otis Sr., before the Islamic terror group, Hezbollah, took over the area, and destroyed the station in a rocket attack.

But there is now some good news about the station. Earlier this year, the Israeli government allocated a radio broadcast frequency to Voice of Hope, which means that it will be able to broadcast across the Middle East.

In an unprecedented decision in April, Israeli Communications Minister Tzachi Hanegbi, finalized the deal to put the radio on the air. The evangelical radio network is now broadcasting messages of hope and peace to the people in Syria, Lebanon, Cyprus and Jordan, and will have expanded night-time coverage into Turkey and Egypt.

You can read more about Cheryl by clicking here. 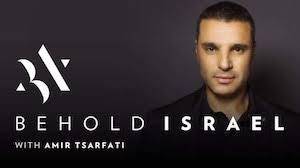 Amir Tsarfati has been an international Bible teacher since 1999. He has spoken at conferences, churches and seminars around the globe.

His teachings are centered on currents events in Israel and the region in light of the Bible.
Read more about Amir by clicking here.